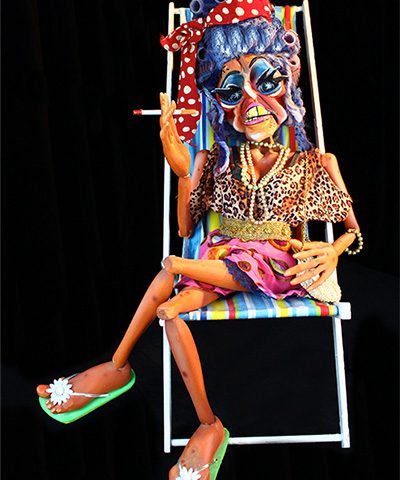 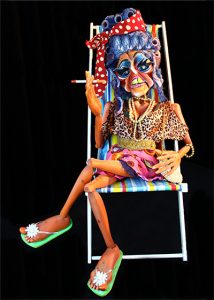 “Wow what a bizarre job you have!” “How lucky you are to be a puppeteer!” This has been said to me constantly over the years and yes, I guess I am lucky to make my living out of doing what I love the most … puppetry. It has taken me from one corner of our vast Australian continent to the other. My troupe of glittering, feathered and bespangled puppet companions have had the pleasure of seeing and performing puppet shows at such exotic locations as Dubai, Singapore, Taiwan, The Philippines and the stunning Pacific Islands.

As an international puppeteer performing specialty shows across the world, I have lost count on how many times people have written to me to ask where I get the inspiration for some of my more unorthodox marionette puppet creations. In particular I’m constantly asked about the loathsome Mrs Elaine Thong. The narcissistic Elaine is the elderly alcoholic, cruiseaholic, chain-smoking battle axe that taunts and haunts my cruise ship shows. The scripts for her self-centred sarcastic and dreary monologues (which are performed live each night) have many times come from just observing and listening to conversations from people on trams, buses and even our cruise ship passengers.

The original inspiration and idea for my puppet, Elaine, actually came many years ago from observing a passenger on one of the cruise ships which I regularly worked on. This elderly withered woman was notorious and because she cruised solo so often she knew all the crew by name and they certainly knew her. I would know she was sailing because she would always sit front row centre for my shows gleefully cackling, coughing, spluttering, clapping and guzzling her schooner of Fosters Beer. She may have been about 70 when I first came across her but because of her devotion to sun-baking she looked more like 85. Many times I was startled while casually strolling around the top decks to discover her lying on a deck chair wearing her faded “leopard skin” two piece bikini with the elastic no longer elasticised. She had carefully drenched herself in coconut oil and was slowly but surely turning her skin into hand tooled Spanish lace.

Early one morning while I was enjoying a quiet coffee in the cafe she tottered in. She stood there in her florescent orange Bombay bloomer shorts, stained candy-striped crop-top and matching plastic sandals waiting for service. Suddenly she erupted into a fit of hacking coughing, spluttering over every surface including me. This dramatic performance managed to silence the whole cafe. As crew ran to her aid she waved them off and quickly recovered saying “I’m alright love, it’s just those bloody ciggies again!”. She ordered her coffee then stumbled outside and sat with her fellow passengers in the smoking area. Luckily for me I could over hear her rasping conversation. On and on she went about her two deceased husbands and her current one that is serving time in jail for shop lifting.

I finished my coffee and returned to my cabin. I sat and wrote what I had observed and heard that morning- she could be and would be the inspiration for a new puppet. 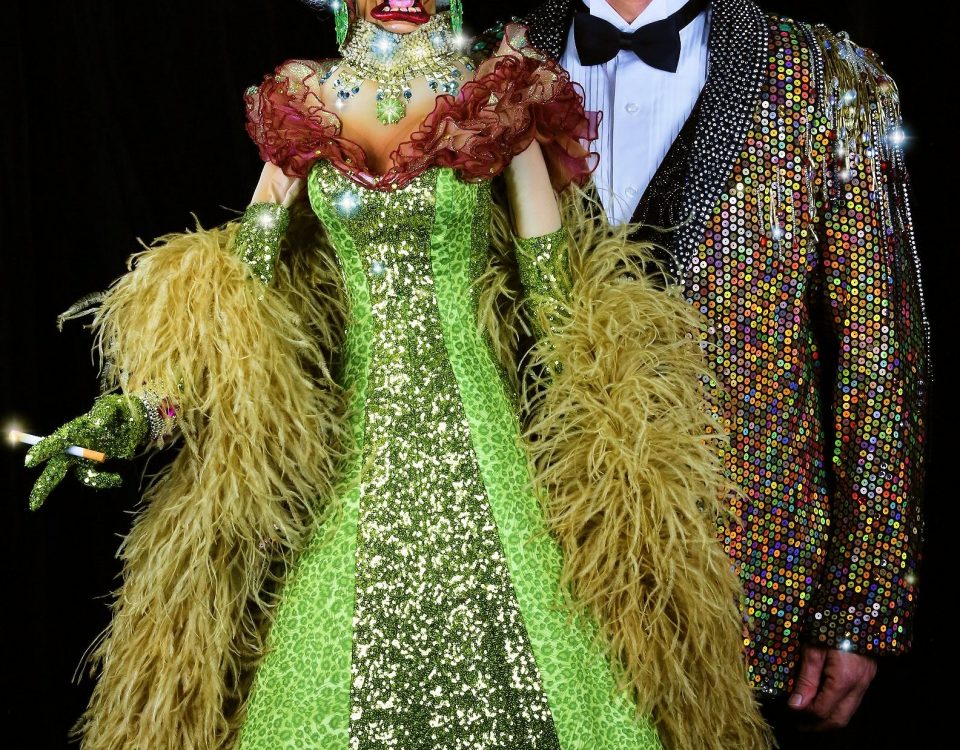