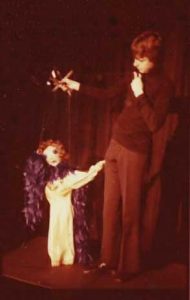 Marionette Puppet Origin Series by Murray Raine
Episode 3  – How It All Began, my early days of puppetry !

During the 1960’s Australia’s most famous puppet company, Peter Scriven’s magical “Tintookies” (which were later to become “The Marionette Theatre Of Australia”) was at its height of popularity. The “Tintookies” extensively toured across Australia and Asia with a number of lavish large scale marionette musicals. The company played to capacity houses in theatres and Arts Centre’s. It also toured smaller scale productions of children’s classics throughout Australian schools.

As a 6 year old, Murray Raine sat cross-legged, front row at Waratah Infant’s School, Newcastle (a small coastal city 200 kilometres north of Sydney). As the curtain rose that day on a performance of The Magical Tintookies’, “Puss&Boots”, Murray sat mesmerized , intrigued  by the skill and fantasy that was unfolding before his eyes. Looking up though the tangle of strings he noticed high above the puppets heads the puppeteers, and that was it for Murray, “Wow, that’s what I want to do!”. That afternoon he told his parents “I know what I want to be – a puppeteer”. A few weeks later, to celebrate his 7th birthday, he received his first marionette, a Pelham Puppet from the UK – “Bimbo the Clown”.

Over the following months his family, friends and school mates endured hours upon hours of relentless “Bimbo” performances. In June 1970 an advertisement appeared in the Newcastle Herald: “The Marti McClelland Puppets” were to perform a season of “Jack And The Beanstalk” in the reception hall of Winns Department Store. Both Murray and his mother were front row centre.

The Marti McClelland Puppets’ production of “Jack And The Beanstalk” was indeed a pure delight: beautifully sculpted marionettes and superb scenery. Once again Murray sat hypnotized by it all.Following this performance Marti invited them both back-stage to meet the other puppeteers and to see how it all worked. Marti happened to mention she also tutored in puppetry each Saturday at The Newcastle Young Peoples Theatre: a drama school designed especially for children. Murray was enrolled a week later.

Over the following five years Murray worked and studied puppet construction, production and manipulation with both Marti and former “Tintookie” puppeteer, Bruce Roland. Bruce had by now settled in Newcastle to develop his own marionette company “The Newcastle Marionette Theatre” which specialized in large scale traditional children’s classics, but his company was no match for the creativity and popularity of Marti and her wonderful puppets.

By 1973 at the age of ten Murray was earning enough pocket money from both his own small puppet shows and assisting back-stage (with “ The Marti McClelland Puppets” on television, shopping centre’s and festivals) to join the union, so he became Australia’s youngest fully paid-up puppeteer on “Actors Equity” books. Shopping Centre entertainment during the 1970’s was big business for any performer that had an unusual act. Jugglers, puppets and magicians were all in great demand, and there was no puppet show more popular in these venues than “Peter Oldham and The Performing Puppets”. Peter Oldham originated from Tasmania and during the 1960’s he had toured for the famous “DaSilva Puppet Co” in the UK and across Australia with “The Tintookies” before forming his own highly successful company.

In July 1974 Newcastle’s Garden City Shopping Centre booked “Peter Oldham and The Performing Puppets” to present a week of performances. Peter’s shows proved to be an enormous hit with the local audiences and attracted huge crowds and once again front row centre sat Murray and his Mother. But this time the show was something very different: Peter performed his marionettes solo in full view of the audience in what he called “cabaret style”. There was no story, no script but a sound-track of popular music and sound effects. His hilarious marionettes and rod puppets danced, sung and magically transformed themselves, and the crowd loved it. As Murray sat, watched and listened to the laughter and applause he thought “that’s it, that’s exactly the type of act I could do by myself!” Once again a back-stage viewing followed the performance. Peter graciously answered questions unaware of what an impact his act had just had on this young boy. So that very afternoon inspired by what he had just witnessed at the shopping centre Murray began to design his own solo marionette cabaret show which was later to become “Murray’s Marvelous Marionettes”.

Christmas 1974 “Cyclone Tracy” tore through the city of Darwin, demolishing every thing in its path. Australia was in shock, the army and navy were called in and Australians were asked to give generously. Never letting a chance go by Murray decided to stage a relief concert. He and a fellow magician of the same age hired a public hall and organized publicity. So on the 2nd of January 1975 “Murray’s Marvelous Marionettes” made their debut performance! The original puppet cast with costumes by his mother consisted of: a stilt-walker, contortionist, pianist, skeleton, the Grand Turk and “The Doods” (a rock band). The Trapeze act would be added 2 years later: Murray had written and received the Trapeze design and stringing from legendary Australian master puppeteer Norman Hetherington who was famous for his iconic television creation “Mr Squiggle”. Twenty years later Norman would go on to design and greatly influence many of Murray’s most outrageous and successful characters.

This relief concert may not have raised enough money to relieve any Darwin locals but Murray realized his new “cabaret act” was far more popular than anything he had tried before now. Over the following few years his act led him to regular appearances on local television, school fetes and even a weekly guest spot in a restaurant. But the true signs of what lay ahead came as a present on his 13th birthday. His mother, inspired by a television special on the flamboyant American pianist “Liberace”, gave Murray a royal blue feather boa! What followed was the creation of Miss Foo Foo: a sequined gown songstress, enormous eye lashes and lips- she became the “star” turn of the act.

In mid 1978 Murray made a train trip to Sydney to meet a hero, Richard Bradshaw, who was undoubtedly the most creative and successful artistic director that “The Marionette Theatre Of Australia would have. Murray sat and listened as Richard explained the harsh realties of “making a living in the entertainment industry”. This truthful news was not exactly what he wanted or expected to hear. He left the theatre disappointed but even more determined to somehow find his own niche. Little did he realize that ten years later he too would be a full time employee of “The Marionette Theatre Of Australia’.

During his high school years he took words of wisdom from Marti and diversified with classes in drama, voice and dance. In time, this would prove to be of great use.

Dolly Parton had one huge fan in Newcastle: a Mrs. F. Raine, Murray’s mother, and following the impact of Dolly’s 1980 film and radio hit “9 to 5” she suggested “why don’t you make a lovely Dolly Parton”. And he did! Dolly’s ample breasts were 2 huge balloons which made for easy packing, but unfortunately during one performance the balloons accidentally exploded and so did the audiences’ laughter – she was an instant hit. So one small incident is what led Murray to the realization at the age of 17 that maybe his act’s future lay with outrageous caricatures of the “rich and famous” and the occasional surprise explosion or two.

After leaving school the lack of work opportunities for a full time puppeteer in Newcastle became a reality. However he did reluctantly manage to find regular work as an actor in a “salubrious” venue entitled “Fanny’s Theatre Restaurant”. This was followed by 18 months as producer and actor at “ Pickwicks”: a more up-market dinner theatre. During this same period a casting call had gone out from NBN (the local television station), for hosts and a possible puppeteer for a new morning children’s show. Murray’s agent Iris Nelmes organized a screen test. On arriving for this audition he was informed that the puppet had not arrived from Melbourne, so instead he found himself on camera doing an “ad-lib” audition with the popular suit character Humphrey B. Bear who was mute!.

Two weeks later the phone rang, his agent informed him “the puppet idea is dropped, but would you like to co-host the show as Professor I. Bungle?”..YES! So for the following two years “The Early Birds” and “Big Dog and Friends” were a staple diet for early morning Newcastle television viewing. The combination of morning television appearances, theatre restaurant adventures and shopping centre puppet performances finally made for a regular income.

Sitting in the studio dressing room in November 1984 Murray discovered a small advertisement in “The Equity Magazine”. “Command Performances Australia” were auditioning for actors, dancers and puppeteers for their 1985 Australian school touring season. This company produced large scale children’s educational theatre and was based in Sydney, Brisbane and Melbourne. After much soul searching Murray decided that maybe it was time to move on, so in January 1985 after three call-back auditions he was offered a contract to join the Sydney company.

So on the 14th of February 1985 Murray packed his puppets and bags, said goodbye to Newcastle and began what would be a most exiting adventure: an adventure that is still unfolding today.