This month we are excited to introduce a new cast member joining “Follies Fantastique”: Ms Vera Divine. Our media and promotions manager, Colin Ostomy, recently sat down for an in-depth enlightening interview with Ms Divine .

C.O : Well welcome Ms Divine. Can I firstly say how truly delighted we are in having you join the cast line up of Murray Raine Puppets.

V.D: Thankyou Colin dear and you can call me Vera. Well yes what a surprise it was to receive a call from Mr Raine offering me a starring role in his little cabaret act. As you can well imagine I don’t come cheap but let’s just say we negotiated a substantial appearance fee. Obviously he realises that I can bring a certain panache and sophistication to his well worn act. I would like to make one thing quite clear before we go any further- I have never ever performed in a puppet show before. Yes my sister Stella and I did perform in a number of tawdry burlesque shows, a circus act and even a performing poodle act at one point. Mind you, I don’t think the audience could tell which were the dogs and which was Stella! Stella had a way with dogs. I think they saw her as an equal and in a funny round-about way, they were right.

C.O : I’m pleased you brought your sister up.

V.D : Dear God that’s a fine choice of words. Many people have looked at Stella and brought something up- usually their lunch.

C.O : Both you and Stella had a highly successful double act during the 1960’s .

V.D : Oh yes we were big , really big ,we played all the top clubs and cabaret venues across Australia and Asia – ”Vera and Stella Divine’s Country Cabaret Cavalcade”. No show was complete without an appearance by us. And yes it’s true Stella and I engaged in some heated and some would say vicious sibling rivalry both on and off the stage . We made the Kardashian’s look like the Von Trap family. But I think she was just bitterly jealous because I was always the star attraction, you see I had the looks didn’t I.

C.O : I understand Stella is sadly no longer with us. Maybe you could just explain to our readers exactly what happened to your sister if you don’t mind?

V.D : Oh I have no problems talking about her demise, well let’s face it, the accident happened in 1979 so there’s been a lot of  water under that bridge since then. I’ll admit there were some scandalous accusations thrown my way at the time that I somehow had something to do with her demise . Complete poppycock of course . The coroner all but exonerated me . Misadventure he called it.

C.O : You were performing in Newcastle when it happened?

V.D : Yes we had been booked to appear at the Newcastle Civic Theatre in a kiddies pantomime of The Wizard Of Oz. Naturally I was Dorothy .

O.C :  Weren’t you a little old by that time to be playing Dorothy?

V.D : Darling Colin, when you are blessed like I am with good genes, snake hips and tight skin I could have played baby Jesus and got away with it.

O.C : And Stella , I’m assuming she was also in this show?

C.O : She was dressed up as the dog Toto?

V.D: Yes, mind you she was convincing even without the make-up and costume. Well we had just finished a matinee and were leaving , she rushed out the stage door and splat . She met her fate under the wheels of a reversing Mr Whippy van. She was suffocated in a tsunami of ice-cream.  It was all very messy, very un-pleasant. You see we couldn’t tell her bits from the Raspberry Sunday Surprise which she was unfortunately drenched in. It was all very distressing. Look I admit I did laugh but it was the best she’d looked in years and I said so at the time. But enough of that , enough of talking about her, let’s talk positives.

C.O :  Positives , what positives came out of that?

V.D : I’ll be honest with you, I felt trapped by her in that double act that we had been peddling since we were kiddies. But it wasn’t easy to do a double act with one half in a lead box. Now not long after the ice-cream fiasco I happened to see Murray Raine performing with his dollies at a League’s club in Sydney. I’m sitting there having a drink and enjoying myself when suddenly it occurred to me that I could easily replace Stella with a hand puppet and the audience would be none the wiser- a stroke of genius wouldn’t you say?

C.O : So I gather from this Murray made a puppet of Stella for you to use in your act?

V.D : Yes he did, and can I say it had far more talent and personality than she ever did – even without my hand up her!

C.O : So let’s talk about how you came to be joining Murray’s show?

V.D : Look I’d retired from the stage 20 years ago and have been living on the Gold Coast when I got his call. He more or less begged and pleaded with me, it was a little pathetic but I felt sorry for him and agreed I would save his act.

V.D : Yes , I’ve seen it , have you? If it was an animal you would have put it down years ago! Anyway I threw a few old costumes in a trunk and trained it down to Melbourne and here I am – ready!

C.O : I see you have done a photo shoot with Murray.

V.D : Yes , don’t you love the snaps , don’t I look fabulous Colin? I personally thought Murray looks as though he’s undergone a cheap face job in Thailand but who cares – he makes me look sensational.

C.O : And what can we expect to see in the show from you Vera?

C.O : I think you have said about enough today thankyou Vera. I think we all look forward to seeing you once again up on stage.

V.D: Thankyou sweetie. You certainly know how to charm a lady. 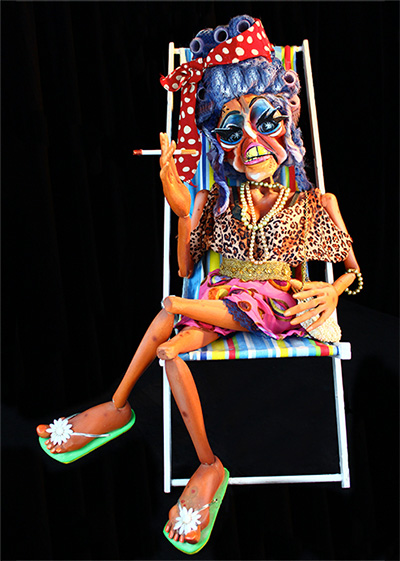